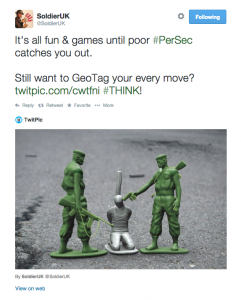 Data mining is widely used in the analysis of social media but there is increasing recognition that it may be limiting as an analysis tool.

We searched across a wide number of social media sites, scraping for content that overtly engaged in defence issues, searching under an array of key words in hashtags and titles.

Our initial findings suggested there was less heterogeneity than we had originally anticipated, especially in terms of key influential networks, content, and the breadth and scope of location of communications. For us, this was a possible indication of the limitations of using key search terms within overt hashtags or title as the starting point, because there is an assumption in this process that hashtags and titles might transparently reflect content. 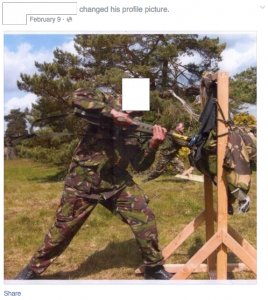 But then we engaged qualitatively with the texts – analysing for discourse, aesthetics and images. It was through this analysis that we became aware of the importance of visuals in social media communications, something that is excluded in basic data mining methods because of a reliance on text-based searches. In our visual analysis we found that whilst images were often additional compliments to the central message of a communication, they were also standalone, recognisable signifiers for the military and defence work and revealing of the communication of particular types of ‘messages’.

This was important not just because of what we were additionally able to find beyond our data mining analysis, but because we would not have been able to capture the visual data (and its context) if we had not embarked on a qualitative analysis of the communications.

For us, this raises wider questions about the tools employed for social media analysis and the extent to which the method may dictate the scope of the findings.

These findings, and their implications are being presented at Streets to Screens on 7th November at Goldsmiths.  We are also hoping to publish them in a forthcoming issue of Information, Communication and Society.

We are now exploring the importance of the visual further in Track 2 focusing on an investigation of the visual and aesthetic components of Twitter communications in relation to defence issues.