Preliminary findings from the DUN Project identified Recruitment, Afghanistan and Training as three of the most discussed topics on social media in relation to UK defence issues.

This finding derives from Track One of our social media analysis collected over a three-month period from January to March 2014 to provide a ‘snapshot’ of social media activity.

The data collected was not intended to be a representative sample of all discussions of defence but rather to identify what, when and how defence issues were most frequently referred to across a range of social media platforms.

The data was analysed visually and textually in relation to topics, authors, types, representations, and stylistic conventions.  Our analysis also considered how social media communications related to offline communications such as mainstream media, public or media events, and political announcements.

The data was also disaggregated by authorship under particular categories including political (eg. Government or state endorsed), British Military, Individual Military members (including serving or ex-serving or family), and External (including charities, activist organisations, members of the public).

We found that although a number of topics were discussed between January to March ‘Recruitment’, ‘Afghanistan’ and ‘Training’ where the most frequently referred to across all groups of authors as the pie chart below indicates.  Other highly referenced topics included ‘Islamist terrorism’ and the ‘Future of warfare’. 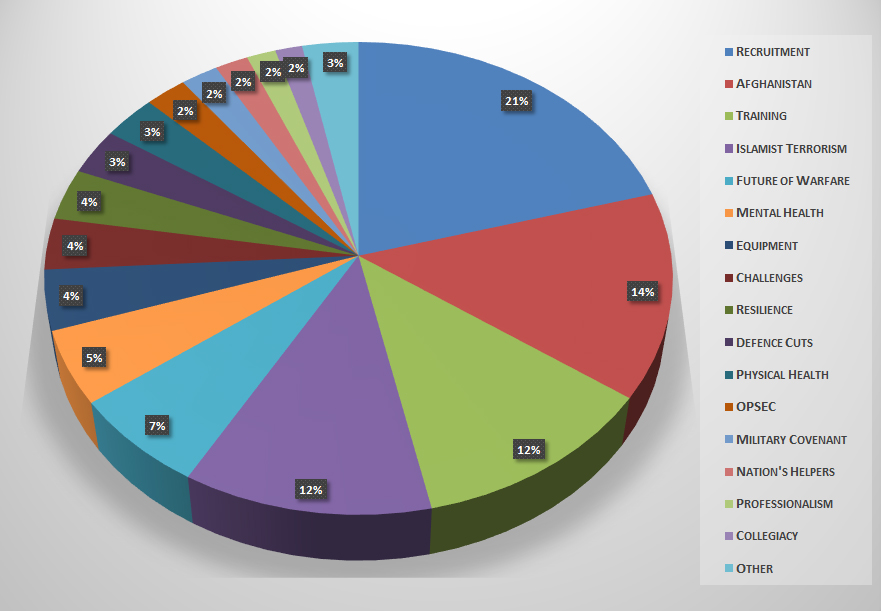 The ranking of the top three topics can (in part) be explained by contextual factors including the British Military’s recruitment drive which started in January 2014 and the British withdrawal from Afghanistan which was highly publicised in mainstream media throughout the early part of the 2014.

When we analysed these topics in relation to authorship we found a high proportion of the social media activity in the top three categories was authored by (and from) British Military social media sites. In contrast, ‘Islamist Terrorism’ and the ‘Future of warfare’ were most highly referenced by those external to the defence community including members of the public, charities and activist organisations.

Other topics worthy of note that were predominantly authored by the British Military were the ‘Physical Health’ of military members, the ‘challenges’ of military work, and the ‘resilience’ and ‘professionalism’ of military members. These findings were particularly interesting because of the potential contradictions that emerge from them.

Analysis of this dataset is ongoing.