In Track Two of our social media analysis we have been looking at flows of information on Twitter in relation to discussions of the UK Armed Forces.

Between April and June 2014 we tracked mentions of all three single services; Army, Navy and Air Force in order to explore who the key players were in the dissemination of news and information around defence issues. 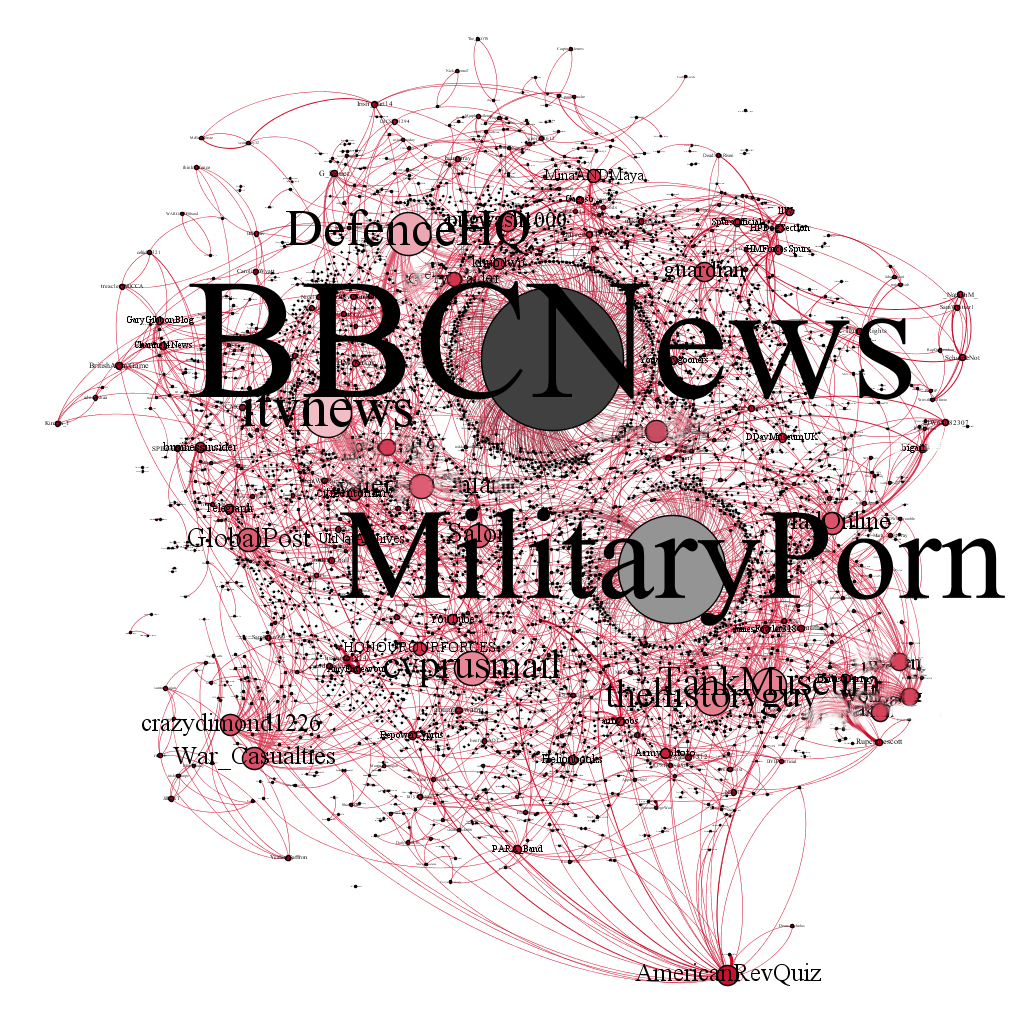 The first finding is that, as expected, mainstream news media organisations are significant actors within the network. These include the BBC, ITV, The Guardian and the Mail Online. For example, the large size of the BBC News node demonstrates that it was the account that was most mentioned by other Twitter users in relation to the British Army. This suggests that the mainstream news media are still significant determinants of what information is circulated on Twitter in relation to defence issues, especially the BBC.

It is noteworthy that another significant node within the network was DefenceHQ – the MoD’s official Twitter account although this is unsurprising given the topic we were searching under. Perhaps more surprising was the fact that the MoD’s account was mentioned more in relation to the ‘British Army’ than the official British Army account (@BritishArmy).

The second finding, and again not unexpected, was that users who included visual imagery in their tweets were significant actors within the network. For example, the account MilitaryPorn features very prominently because it mainly posts visually arresting images of military equipment and military personnel. It was also notable that several more prominent individual Twitter users within the network were mentioned by other users because they had tweeted ‘interesting’ images. These ranged from the partner of a soldier who was killed in Afghanistan to the Editor of a French political and cultural Magazine. This finding reinforces other research that suggests Twitter users tend to retweet imagery more than text-based tweets. But, it also draws our attention to the extent to which competition may exist between Twitter users who wish to gain prominence in the Twittersphere through the incorporation of visual imagery into their tweets.

The third finding was that there are outlier communities within the network who regularly discuss or mention the British Army but who may not be significant nodes within the wider network. For example, towards the bottom right hand corner of the visualisation a community of Twitter users in Kenya is represented because of their mentions of the British Army in relation to the rejection of British Army help with anti-poaching training. Similarly, towards the bottom centre there is a community of Twitter users retweeting a Cyprus Mail article about Cypriots fighting in the British Army in World War II. These communities become important because they are distinct and connected yet they are not necessarily contributing to conversations and engagements which are discussed by the more dominant nodes in the wider network.

We will be publishing our analysis of our Twitter data in relation to the Navy and Royal Airforce in due course – watch this space!

In the meantime, we welcome all comments on any of the above (see comment box below).