It is noteworthy that this dataset was significantly larger than the ‘British Army’ and ‘Royal Navy’ datasets. This is because of the widespread use of the letters ‘raf’ both within phrases or as part of phrases and Twitter account names not related to the Royal Air Force (e.g. ‘raf you are my hero’ in which ‘raf’ was the name of an individual.)

This reinforces a point we have made previously with regards to the limitations of social media analysis techniques that assume that searching for particular search terms, hashtags and titles generates data that transparently reflects relevant content.

With our RAF dataset, a substantial amount of re-coding was required to filter out tweets/accounts that were irrelevant to our analysis. Only then could we adequately analyse the flows and content of tweets that mention the Royal Air Force (RAF). The point to note here is that had we not done so, our analysis and findings would have been significantly skewed.

From the re-coded dataset we were able to produce the visualisation below where the larger nodes represent Twitter accounts that were most mentioned (using the @ symbol), or most mentioned other accounts, in relation to the “RAF” (as the Royal Air Force).

A summary of the key findings relating to this visualisation is located below the image of the central part of the network. 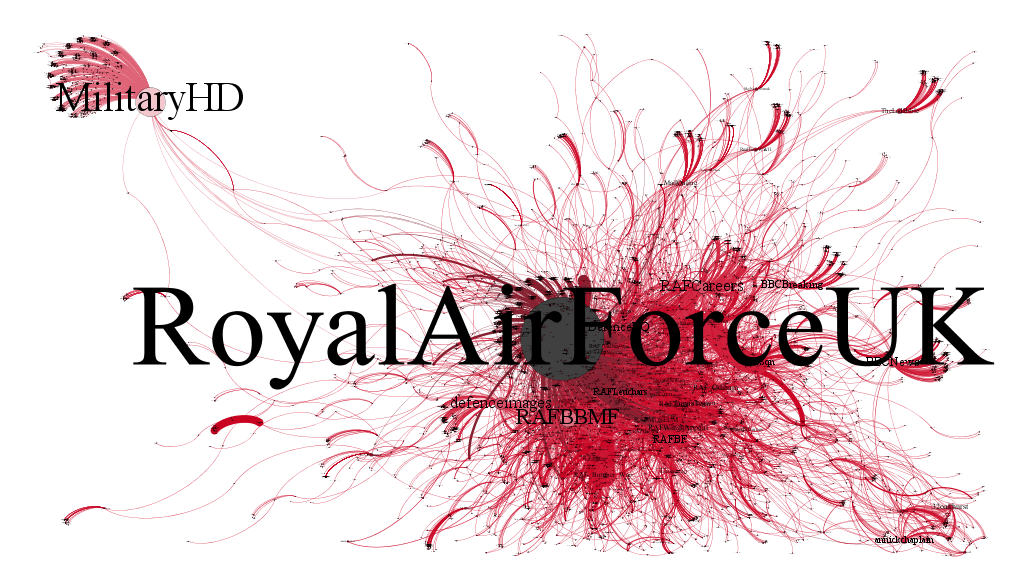 Our first key finding, much like the Royal Navy dataset, was that the most mentioned Twitter account in the ‘RAF’ network is the official @RoyalAirForceUK account. As we stated with regards to the Royal Navy visualisation, this is not surprising in itself, but suggests that the most significant determinant of information circulating about the RAF is the Royal Air Force Twitter account itself. This is in stark contrast to the British Army where the mainstream media (@BBCNews in particular) were those responsible for the most mentions.

This suggests a couple of things. First, that the Royal Air Force is of less interest to the mainstream media and second, and perhaps more interestingly, that there are few nodes outside the RAF community that become important in the network.

This latter point raises key questions as to whether the network is in fact reinforcing existing offline flows of information in the Twittersphere. And, this is important because we have noticed in other areas of our research that the official institutional accounts (British Army, Royal Navy, Royal Air Force) rarely ‘engage’ other social media users in conversation.

Rather their communications tend to be one-directional – posting a tweet, blog, Facebook update, Tumblr image – but not necessarily following it up with any further engagement. Consequently, there is a reliance on other Twitter users to retweet updates and engage in ‘conversation’ around information that the official RoyalAirForceUK account tweets which may limit the extent to which the RAF’s Twitter updates reach constituencies beyond the immediate RAF (or Royal Navy) network.

Our second key finding relates to observations that we have also previously made with regard to the importance of images in both the analysis of social media and in the flows of information in Twitter networks.  In the visualisation above for example we can see that “@MilitaryHD” – which mainly publishes images of military life and equipment – is a significant node in the network. In this way, the “@MilitaryHD” account is similar to the widely tweeted “@MilitaryPorn” account in our British Army dataset.

But more significantly we found that the prominence of @MilitaryHD within the network (during this time period) was predominantly due to their tweeting of ONE particular image (subsequently re-tweeted at least 915 times) with the accompanying text: ‘“A pilot in an RAF Harrier GR9A ejects just in time, Kandahar Air Base, Afghanistan” (shown below). 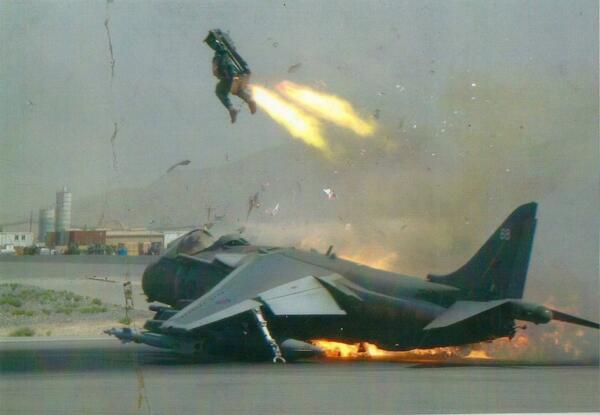 Even more interesting however was that the @MilitaryHD tweeting of this image was not the first time it had appeared in the Twittersphere, or indeed social media more generally.

In fact, when we traced the origins of the image (as far as we could) we found that the original incident captured in the image took place on 14th May, 2009 and the image first appeared in The Sunday Times on 17th May of the same year.

Video footage of the incident appeared on Liveleak on the 3rd June 2010, and the image started to appear more widely online on the 7th June 2010.

All of these observations draw our attention to two key issues.

First, that images – and certain types of images – have particular resonance and power within Twitter and other social media networks. For example, whilst the official MOD “@defenceimages” also featured within the RAF network, it was @MilitaryHD that gained most prominence primarily because of the Harrier image.

This raises critical questions as to what and why certain images (or accounts that reproduce images) gain more traction than others.

Second, that information consistently (re)emerges through social media platforms that may purport to be ‘new’ but in fact is not. Indeed, the re-emergence of information is a key feature of social media, often with little signposting but with wide implications for information flows within networks.

In short, we need to qualitatively understand the wider context and content of Twitter activity to best understand the power of nodes, networks and flows within the network. Visualisation maps of quantitative data are a useful starting point and help to organise the data, identify patterns and focus attention on key issues. But the analytical devil is in the (qualitative, visual, textual) detail which requires considering its qualitative characteristics.

We are currently undertaking this type of deeper qualitative analysis of visual imagery within the British Army, Royal Navy and RAF datasets and we will be posting our findings in due course.

In the meantime, we welcome comments on any of the above. Please use the comment box below.